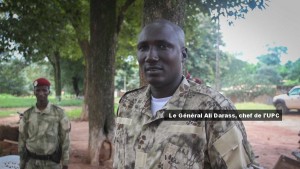 Bambari -Vladimir Monteiro, spokesman for the Minusca announces the reinforcement of the military devices of the mission in Bambari where the threats of confrontation between the UPC and the coalition led by the FPRC are more and more real. The spokesman of the institution reports the determination of the mission to avoid the battle of Bambari. He said that in an interview with the RJDH.

RJDH: Do you still regard the FPRC as a real threat despite the losses that the movement suffered as a result of your Saturday strikes?

VM: Well, the coalition led by the FPRC and the UPC is a threat to the civilian populations of Bambari. So it is not that the FPRC, both movements pose a threat to Bambari.

RJDH: Both movements pose a threat, except that you agree to have one of these two threats, in particular the UPC, next to you in Bambari.

VM: We said that both constitute a threat and, as the Special Representative said, « no armed group should take control of Bambari ». That is why we are present and we have strengthened our systems.

RJDH: Neither of the two armed movements should control the town of Bambari but in reality, UPC and in the city and it is even this movement that imposes itself today. Is not it?

VM: La Minusca, I just said, the Minusca has strengthened its facilities in Bambari. And I stop at this level.

RJDH: Where is Ali Daras now?

VM: Ask this question to the UPC itself, I am talking about MINUSCA. What I can tell you is that we are working to ensure the protection of the people. At the same time, we engage in discussions with both groups to stop hostilities immediately.

RJDH: It would seem that the leader of the UPC is out of Bambari. You confirm that?

VM: What we said we reiterate. For several days, we have been using force to show that UNMISCA will not accept a war in Bambari, hence the intervention of force. We also work with the two groups to tell them that this ceases and that they find a solution to their differences through dialogue. We are discussing with both groups, we are discussing in Bambari but also with their representatives in Bria, Birao and Kaga Bandoro.

RJDH: You want to avoid the battle of Bambari while those of the towns near Bakala have taken place. Did the Minusca let Bakala, Ippy, Bria and others?

PP: MINUSCA can not let it happen in the cities you are quoting there. Last Saturday we intervened in the neighborhood of Ippy. So Minusca did not let either Bakala or Ippy or elsewhere. In relation to Bambari, we reiterate that there are several issues, that is to say, to protect the populations of armed groups from exactions, so to avoid a war, to allow the armed groups to continue their activities especially towards the eastern zone, also Help strengthen the authority of the state. We do not favor one city to the detriment of the other. We have temporary and operational bases all over the place. Does not say that we protect one city at the expense of the other. We made these arrangements because in Bria, the fighting between the FPRC and the UPC caused 5000 displaced people in addition to the victims. That is what we will avoid in Bambari. We will by all means, prevent the battle of Bambari

RJDH: The line of Ippy still holds because the FPRC entrusted the RJDH to have crossed it.

RJDH: Is your red line maintained at Ippy?

VM: I told you that we have the men and the means not only in Ippy as in other parts of the city.

RJDH: We learn that humanitarians from Bambari have sought refuge at the UNMISCA base. You confirm that?

VM: We should ask the humanitarians.