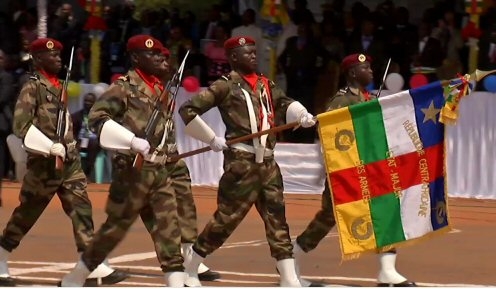 Terrible, is not it? How can a president who claims to be legitimately elected by a whole people and who has an absolute obligation to ensure his protection, to defend the integrity of the national territory and to ensure the preservation of the fundamental interests of the State, Affirm peremptorily on the antennae and before the cameras that the Central African Republic has no army? Why, then, were appropriations intended for the monthly payment of wages due to this category of State personnel entered in the Finance Law for the financial year 2017? Is it not simply very awkward for a democratically elected president to make such statements? How can he stand on the side of the international community which has made the Central African crisis a real business and who does not welcome the rehabilitation of the facades and their redeployment throughout the territory for fear of  » Shorten the stay of the Minusca in the Central African Republic?

Questions raised by Central Africans in the aftermath of one of Boy – Rabé ‘s thundering threats to VOA’ s antennas denouncing an army mutiny in preparation. Questions that were all the more serious that a day later, the President of the Republic would have reversed these remarks to deny them. This is simply called unacceptable and shameless malice at the top of the state. Of the unacceptable and awkwardness which testify that man would indeed have been imposed on the people and therefore he would not care to plead for his cause. Provided that he is silent and shuts his eyes on the grave war crimes of which this people is the victim every day, that his interests are scrupulously preserved and that the international community continues to benefit from it …

However, notwithstanding Touadera and all the thurifera of his regime, the Central African Army exists and is better suited to neutralize all these warlords and armed bands that foam the Republic. With a small dose of goodwill and political courage, it would contribute effectively and efficiently to the resolution of this crisis. Unfortunately, the legitimate and legitimate authorities, chief among whom a certain Touadera, are concerned only by the unrestrained search for their small and low interests and give free rein to the international community which can only be against the rehabilitation of the facades.
Coup d’etat? Mutiny? Bluffing, for it is unacceptable that the security of a nation should be entrusted to foreigners and that the faca be excluded from the reform of the army. It is simply a coup d’etat against the people and a great plot against a whole Republic. Of the improbable and high treason liable to dismiss …
Follow the famous intervention of President Touadera on VOA and reprinted by AFP:
« We are aware of all that is being prepared in the districts of Bangui, so that there is a mutiny in the army, » warned the Central African president in an interview on national television in Sango, language co -official of the country with French. Faustin-Archange Touadera, on Thursday denounced plans for mutiny on the part of soldiers who fear their non-reintegration in the new Central African army, calling the fomenturs to « return to reason. »
« I think there is still time, so that those who are behind this mutiny in preparation return to reason, » said Mr. Touadéra. « We do not have an army to defend the suffering population, » said the head of state, « so why a mutiny, when we are fighting so that, together with the bilateral partners and the community We can reorganize our army.  »
« A mission of the European Union (EUTM-RCA) is responsible for the reconstruction and training of the Central African Armed Forces (FACA), victims, as the state authority, of the conflict that has ravaged the country since 2013 Fearing not to be integrated into this restructured national army, several hundreds of Central African troops, considered to have belonged to the ex-Rebellion of Seleka or the anti-Balaka militias, the two protagonists of the conflict, threatened to mutiny.
The conflict erupted with the overthrow in 2013 of former President François Bozizé by the Seéléka coalition claiming to defend the Muslim minority, leading to the counter-offensive of the mainly Christian anti-Balakas. Touadéra was elected a year ago, in February 2016, during a presidential election to turn the page of three years of violence having torn the country. The president recalled on Thursday the international support that benefits his country, evoking a recent visit of the director general of the International Monetary Fund (IMF) Christine Lagarde and the next visit of the vice president of the World Bank. The United Nations Mission for the Central African Republic (MINUSCA) has 12,000 troops in the country. In addition, a donors’ conference in Brussels in November promised more than two billion euros for the rehabilitation of the Central African Republic.
The post-colonial history of the Central African Republic, eventful, was punctuated by coups, rebellions and mutinies.
Jean – Paul Naïba