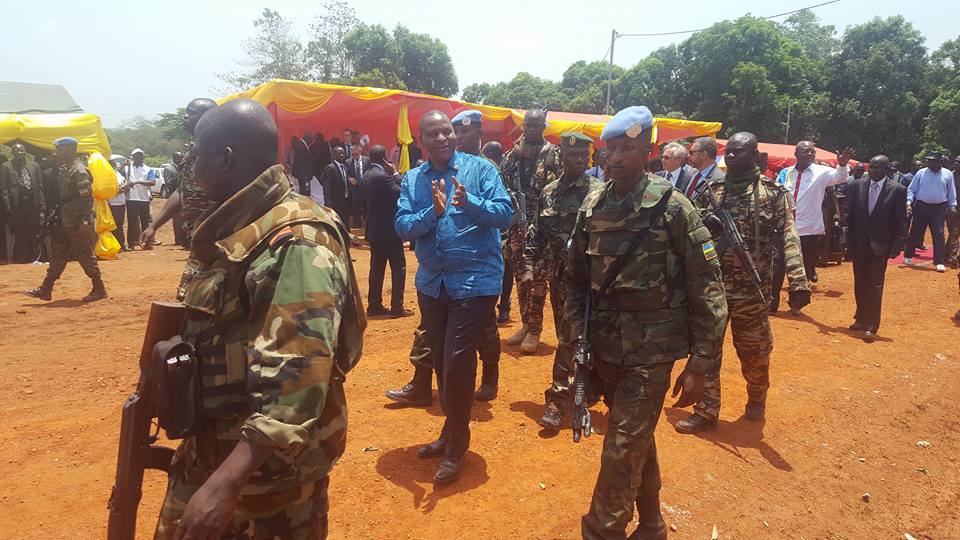 Central African countries of paradoxes. While everyone continues to hold their breath to see how the ongoing crisis in the country will be resolved, while (opposition) politicians continue to observe a reservation to their right to criticize the government’s action, Faustin Archange Touadera, the surprised President of the Republic, strongly supported by the old Bozizi strategy, said that the government’s social partners showed common sense by saying that « there is no point in putting the country in turmoil. » , Is already advancing in the campaigns of conquest of popularity to, obviously, prepare his reelection after his first term which ends on 31 March 2020.
The spirited dances on the political arena have begun. Priority has changed sideways. It is no longer the return of peace and security. And besides on this double requirement, where is the winning strategy? The DDR-R is a circle-manger while the population is being massacred every day, every hour and evidence of all the statistics, every minute – a corpse must die somewhere on the Central African territory. A year after its inauguration, which the majority is preparing to celebrate with great pomp, the situation in CAR has remained as it has been since the transition, even though, thanks to pressure from civil society and internal self-purge work illustrated By rising to the niche of self-defense groups in the district PK5 to eliminate the head cutters of this district constituting the tail of the devil and the head of prow of violence, Bangui the capital breathes a little better.
However, the Minusca, it continues to serve as an atomic umbrella for criminals such as Ali Darassa, Sidiki, Al Khatim and others, on the pretext that the Central African government has not issued a warrant and played the partition by supporting some Against the others already torn apart. Scenes of killing, the government keeps mouth sewn ndaka. Nothing, nothing concrete is done except this so-called « hope » which explains the entreaties directed at the armed groups refractory to join the circle of the eaters of the DDR-R. While these refractors, who in reality have terrible demands to swallow the government, are advancing on the military ground in the hope of getting the latter to take into consideration their most disproportionate demands, sustained that they are d In one way or another by the international community which swears by dialogue and dialogue alone to resolve a crisis that has instead become a scene of crimes without sufficient sap of valid political claims.
Who is right who says that Touadera is nothing but farce: it can not do otherwise when the weight of Chad is weighed on the side « dialogue and concession » of the balance. And soon, he will disappoint his voters heavily by taking unpopular measures with the help of head cutters.

To caress the truth and to cast a flat in the wounded hearts and this, in spite of the dead ones that fall like flies, Touadera in its logic, preaches to who wants to hear it that « there will not but never, Disarmament « . Not the slightest force to oppose the « murderers of the Republic » and all white-collar criminals. The reality is, « there is not enough will on the part of the leaders of the country to put pressure on the international community that delay the appointment of peace in the CAR, » sighs an observer. In the meantime, the Central Africans are sacrificed on a daily basis while awaiting the opening of all-out trials sung drum and trumpets against the perpetrators of the crimes, which must however be sought beforehand, jealously guarding in prison by taking measures of any eventuality of escape Pending their trials tomorrow that would bring the long-awaited peace in the battered hearts of the victims.
Ah haha! In other words: kill, kill today and kill again, no one will come to arrest you. You do not see: where are Aroun Gaye, Abdoulaye Hissène, Ali Darass …? Free, bodies, souls and arms. And free to continue their crimes. For the time being, we are satisfied with « documenting the facts » … Here is an exciting sentence.
It is to this murderous Central African that Touadera has no solution to bring to reduce his suffering sings his glory and grandeur on the pretext of bringing him gifts. In Mbaiki two weeks ago, he went to tell the people of the Lobaye that the money of 72 million CFA francs he contributed to the rehabilitation of the Higher Institute of Rural Development (ISDR) Is it. This is the money of the African Development Bank (AfDB). He is not ashamed to beat his breast: I am your savior. Really !
And it is the same language he held at Boali and here it was much more explicit: « You elected me massively, and now I have come to thank you. I did not come with my hands empty-handed, I came with these vehicles and these medicines for you, « he trumpeted in Sango national language. By the way, it was a gift from the European Union under the 10th EDF (European Development Fund) program, in this case the Ombella-M’Poko, five vehicles and medicines. A program aimed at restoring the authority of the State and redeploying the administration throughout the territory. It was on the occasion of the handing over of partial rehabilitation of the Boali I hydroelectric dam plant on Monday.
This event was an occasion to discover the nucleus of the political campaign machine of Touadéra, thought in the brain of a certain Bertin Bea, deputy of Boali under the colors of KNK, the political party of Bozizé which had sanctioned the candidate Touadéra Before rehabilitating it by « a maneuver of meanness » for reasons that everyone knows. At Boali, the crowd was trained and harangued to sing to the glory of Touadera. And here is his reaction: thank you and take this gift (…).
The question is one of concern: at this pace, what will become of the sacred Union advocated by Touadera and which was supposed to bring together all the political actors around a shared reason that is the return of peace And security in the country? On the understanding that everyone should set aside his ego and throw himself into the paw of peace and national reconciliation. For each political actor, especially those of the opposition, with regard to this comma in the back, would be led to reconsider his position and begin his struggle for positioning. We can therefore deduce that the sequel is the ferocity of the political struggle which is predicted above all that it is the power that gives the kick off. There is also a fear of an armed ramification of this political struggle, especially since all armed groups still have all their military arsenals from them and are far from disarming even if they have joined the DDR-R.
It is therefore to be expected that there will be clear positions in the coming days or declarations of focus, for it is clear that the government is now openly using all means, including (state) To reassure the people that everything is going well in this country, practically without a state or at least without authority (of the State), whereas to this day a year of power and four months after the Brussels round table, Is still in place. It is even feared that these vehicles and other goods donated by the EU will end up finding their real owners who are the armed groups, real masters of the place. While the people and the State will take care in the future to repay the debt without question.
And finally, it remains to conclude that Touadera now rows with « dialogue » on the lips and the trickery of another era in his heart. No wonder when it is known that it remains largely surrounded by bozizistes who seek a second chance.
Prince Coh