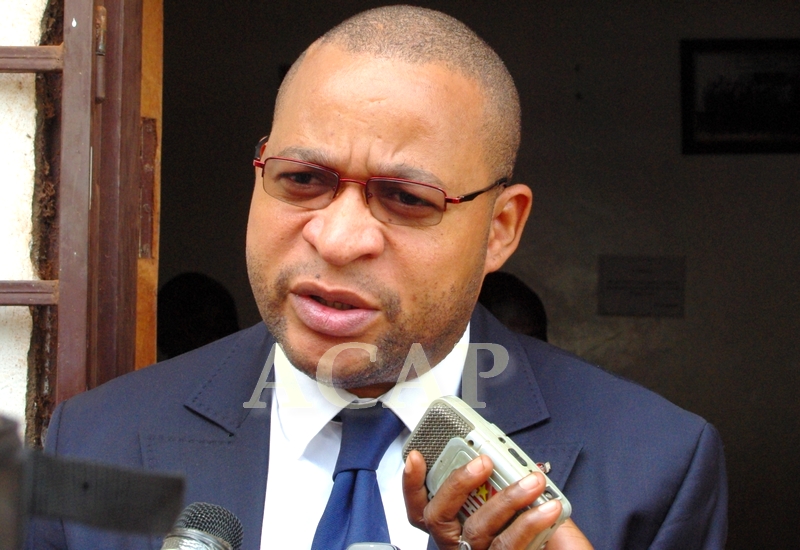 Finally, we will establish a political law according to which, the weakness of the regimes which succeeded one another in this country, comes from the « Tu me connais » and from all the thurifera who kill themselves to make them happy, sometimes without the knowledge The king in whose name trades of influence are unnecessarily orchestrated. The Almighty Minister of the National Gendarmerie, Thierry Vianney Mintékoé refuses to submit to Jean Serge Bokassa who is the only one to sit on the Council of Ministers. And as « there is never smoke without fire », this General who has never been seen on the front, prides itself on the support of Simplice Mathieu Sarandji and two relatives of Touadera to the Presidency of the Republic.

For several days, a merciless struggle has been waged between the Director General of the Gendarmerie Nationale, General Thierry Vianney Mintékoé and his Head of Department, Minister Jean Serge Bokassa. At the base of this towel which burns between the two men, a matter of appointments. Hey the appointments when you hold us!

In accordance with the texts governing the general administration and the Gendarmerie Nationale, appointments to positions of responsibility with regard to the officers of the Gendarmerie fall within the discretionary power of the President of the Republic on the proposal of the Minister in charge of the  » Interior, Public Security and Territorial Administration. Only the appointment of the sub-officers falls within the competence of the Director General of the Gendarmerie Nationale, but the opportunity must be proved.

It seems that the Director General of the Gendarmerie, who is proud of having been in a white war school, is not aware of these principles or simply decided to follow a logic of indiscipline because That he cherished the dream of becoming Minister of Public Security, a position he had held without shining during the Transition.

Two whims of General Mintékoé shed enormous ink. By memorandum he carried out movements of the officers and sub-officers of the Gendarmerie. The news reached the ears of the Head of Department who asked him to postpone these movements for the above reasons. Firstly, the appointment of officers is the responsibility of the Head of State.

As for the NCO, although it falls under the jurisdiction of the Chief of the Force, there are reasons that make it inappropriate, among other things, for the fact that we are already in the middle of the school year. There is also the phenomenon of non-joints that must be tackled. On the side of the police, sanctions have fallen to strike the black sheep while at the gendarmerie, instead of sanctioning, they are agitated to name and to name again. Finally, a joint committee is set up for effective control of the elements of the Internal Security Forces. Partners such as UNDP are awarding prizes.

The multiple injunctions of Jean Serge Bokassa through a message carried have remained dead letter by what Generalissimo Thierry Vianney Mintékoé thinks is above all. On several occasions, the outgoing Cabinet Director Etienne BISSA, who is also a General of the Police, sent him messages for a call to order. The reactions of Mintékoé are more than discourteous. Mintékoé gives himself to correct the messages carried and to send them to the Director of Cabinet, because during the Transition Mintékoé was Minister of the Public Security and BISSA was Director General of the Police. Funny characters!

As for Jean Serge Bokassa, Thierry Vianney Mintékoé does not intend to submit to him for the simple reason that it is not only a young person since Mintékoé believes himself a gerontocrat but also because he is a civilian. He can therefore submit only to an older and more senior or older person than himself. The paradox is that Mintékoé claims to submit to Colonel Sélésson, Minister Counselor BIRO, Prime Minister Sarandji and Faustin Archange Toaudéra who are some of the civilians, others are less senior than him and Colonel Sélésson, Is no more graded than he.

As a result, one wonders how the President of the Republic could tolerate such behaviors that fall under indiscipline. If Mintékoé can not submit to his Minister, he will never submit to anyone. Assuming that all the Dg decide to show insubordination towards their Ministers because they have the support of the relatives of Touadera, the future of the country is ruined.

Under the Transition, a former Dg of the Gendarmerie, Colonel KIKOBET had engaged a useless arm wrestling with his Minister, General SAMBIA because a Counselor of the Primature was lording the Ministry of Security. The case of Mintékoé is extraordinary. Three times in a row, he served as the Dg of the gendarmerie under Bozizé, Djotodia and Touadéra today. And it is with this logic that he dreams of returning to the Ministry of the Interior. Is not that « Who drank, shall drink? »