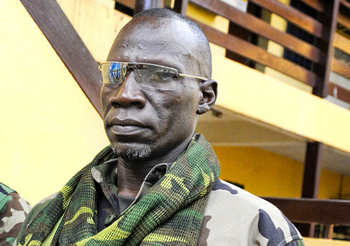 TO READ ALSO : Central African Republic: Peacekeepers caught in the grip of clashes between armed groups in Bambari Central African Republic: UN peacekeepers caught in the grip of a clash between armed groups in Bambari After several displacements, Gadio Even succeeded in having Noureddine Adam’s PRGF and General Mahamat Al Khatim’s MPC sign a document in which the rebels pledged to work for peace in exchange for ministerial portfolios. In September 2016, Gadio presented this document to President Faustin-Archange Touadéra and his Chadian counterpart Idriss Déby Itno, but they feared that the process would be considered too communitarian.
TO READ ALSO: Centrafrique: what to face the return of Noureddine Adam? It was finally Angola that resumed mediation in December at the request of Chad, but initially, without Ahmad Allam-Mi, the secretary-general of Ceeac, of which Luanda is a party, Be informed. It was not until January, on the occasion of his visit to Angola, that it was decided to unite efforts within the African Initiative for a Peace and Reconciliation Agreement between the Government and Armed groups, including the AU, Ceeac and the GLRL are involved.
End of the discussion