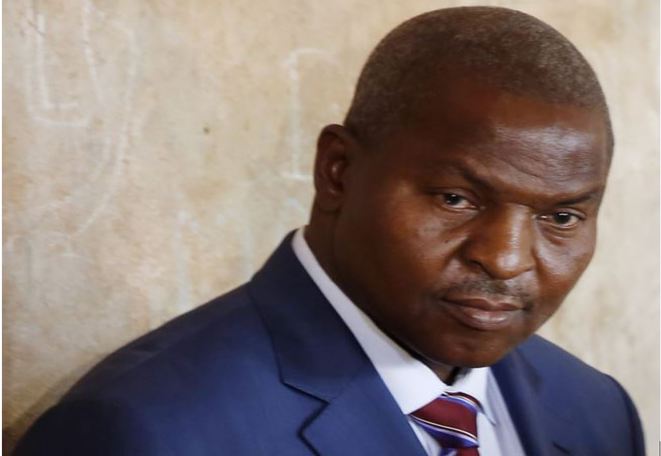 Her name is Zita Gonendére. In her late thirties, she has been fighting as a salesman of smoked meat at the PK 12 market for some time. In spite of tensions on the part of its employees, it resumed its activities after a moment of interruption, following the payment of a deposit of 100 thousand CFA Francs.
The only survivor of a family of 7 children, it is thanks to this small business that she fights every day to raise the offspring left by all her deceased brothers and sisters and look after her poor mother in sufficiently advanced age. She was coldly dejected on March 30, 2017, commemorative anniversary of the assumption of office of President Faustin Archange Touadéra. She was murdered crapulously and loosely, sitting behind a motorcycle taxi, shortly after the Ombella bridge, about five o’clock in the morning, by two (2) bullets pulled by an anti – balaka who was chasing her with a motorcycle. Falling backwards, she will die some time later after having emptied her blood. His carrier to get off, park his bike and engage in a battle in hand with his two (2) assailants. After hard and hard fights, he will succumb in turn, first stabbed at the level of the chest by one before being then completed by the other of a shot.

The announcement of their tragic disappearance will arrive around 7 am at PK 12 and, thanks to the solidarity of the other saleswomen and shopkeepers of the locality, the two remains will be transported from the village Ombella to the community hospital to be Formalized and deposited at the morgue. A few minutes, one will hear murmuring and suspect the arrest of one of their assassins by the Anti-Balaka of Damara.
A real fate broken. An eating researcher who leaves leaving behind her poor mother, a 4-year-old child and a whole bunch left by her brothers and sisters. A terrible burden that she can not bear, given her age. And what about the driver of the taxi – motorcycle who lives at PK 22 and who also survives by doing this small trade to make his family survive in his turn?
Two important and pertinent questions which pose in all its nakedness the imperious necessity of the people of the Central African Republic to live in peace and security and the total incapacity of President Faustin Archange Touadera to reassure him in this field in accordance with the honeymoon and enticing promises During the election campaign. After more than a year of managing the affairs of the city, it is a real tragedy that continues to fall every day that God makes on whole populations on this land of men, from Koui to Bakouma, Bocaranga, Paoua, Kaga – Bandoro, Ndomété, Bakala, Bria, Bambari, Ippy, and others.

Whole cities where no one can live in peace and where peaceful populations are taken hostage by warlords of lawless faith who kill with impunity, raise taxes, rackete, set fire to houses and granaries, force men and women , Children and people of the 3rd age to take refuge in the bush to live like animals. Nevertheless, the candidate Touadera promised the people the security, the disarmament by force of all the armed bands, the redeployment of civil and military administration throughout the national territory, the return of the thousands of displaced persons, The end of impunity and the restoration of the authority of the State ….
Where is it today after one year of effective exercise of power? How is it possible that warlords such as Ali Darass, Al – Katim, Nourreldine Adam, Sidiki continue to plague and kill Central Africans and Central Africans? Is it not simply responsible for all these abuses and killings because of the total lack of firmness, flexibility and inability to take rigorous measures to defend the integrity of the national territory , The protection of the people and the preservation of the fundamental interests of the State?
In order to prevent the people from rising one day to ensure their own security, the alert launchers and all the fighters of freedom and democracy propose that it is more than urgent for President Touadera In the aftermath of the murderous assassination of Miss Zita Gonendéré and that taxi-motorcycle driver in her riding of Damara, of the diktat of the international community and of Minusca, who do not want this crisis to end and to co-operate with South Africa, Angola, Ethiopia or Rwanda for the redeployment of all defense and security forces throughout the territory within a period of six (6) months at the latest.
It will only be at this price that he can redeem himself a little. For the people want peace and it passes through a language of firmness towards all troublemakers from the east to the west from north to south. Jean – Paul Naïba