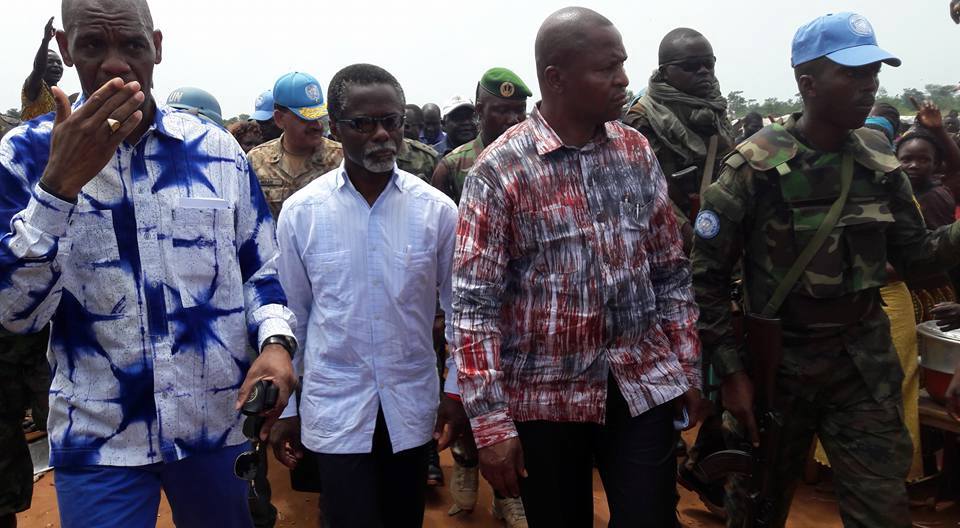 Finally, Mr. Onanga and the Minusca struck hard at Ippy to neutralize the FPRC / MPC coalition forces that were marching towards the strategic city of Bambari in order to dislodge a certain Ali Darass.

Ali Darass? Another mercenary of the famous Seleka coalition, a Pehl of Nigerian origin, and formerly lieutenant of a certain Baba Ladé, who had established his headquarters at Bambari for more than two years, who levied the tax there, Exploits gold and diamond in Ndassima in Ouaka and Upper Kotto, which kills, rapes, looting, burning houses and granaries and forcing men, women, children and people of the third age to seek refuge in the bush and To live there as animals, in the light of the UN forces and the legitimate and legal authorities of the Republic. A murder victim and a criminal of the worst kind who was accused by Ms Dorothée Tiyangou, a UNDP deputy, of having committed war crimes in Bakala and whose name has just been quoted in the latest Human Rights report Watch. A criminal whose residence is attached to the headquarters of the Minusca in Bambari but was never worried during this attack as if he were placed under the high protection of the UN forces. Protection that was violently denounced by the FPRC / MPC coalition forces and by the population, simply asking for his departure from the town of Bambari. A request that would have obtained the endorsement of the military high command of the Minusca and that would have given Ali Darass a ultimatum of 48 hours to refer. Today, as we are going to press this article, this deadline is far out of date without a vigorous reaction on the part of Minusca to put an end to this mercenary. But, let him go? To go where ? Would not the opportune moment have long since come to put his hand on it and on all the warlords who raged in the 12 prefectures of the Republic?

In any case, his arrest should occur sooner or later, as David Brown had asked, more than one (1) year ago, in an article published by RJDH:

« The United States Chargé d’Affaires in the Central African Republic, David Brown is calling for the arrest of Ali Darass, according to him, from the unrest in Bambari in Ouaka. It also requires vigorous action against the Anti-Balaka present around the city. A declaration made on the stage of the Espace Francophone broadcast of Radio Notre Dame on Sunday, August 23, 2015 and is in a context of renewed tensions in the city of Bambari.
« I visited Bambari last July 24th and for me it was shocking to see that Ali Darass, of a faction of the selka whose elements were still pointing, always racketete with the sight of the Minusca and the Sangaris in more. It levies taxes on coffee production, « the diplomat noted.
The Charge d’Affaires found the presence and actions of Ali Darass unacceptable in much of the region he and his men occupied. « I find it intolerable that a gentleman should be permitted to continue to carry out illegal and large-scale actions, affecting at least three prefectures. I believe that something must be done, either Mr. Ali Darass must stop this type of behavior or he must be arrested « .

In addition to the elements of ex-Seka, the Anti-Balaka are also considered as one of the sources of the problems of Bambari, « Not far from Bambari, there are Anti-Balaka which threaten Central Africans including Of the Fulani. I believe that any ethnic group must be protected by the State and by Minusca. So we must not only act against Ali Darass but act against these Anti-Balaka.

The reaction of the American Charge d’Affaires follows that of the President of the National Transitional Council, who after a visit to Bambari in the past months, « called for the arrest of Ali Darass », considered by him as « a mercenary Sudanese « .

Ali Darass is one of the generals of ex-Selka. He is currently one of the factions of the former coalition, the Union for Peace in the Central African Republic (UPC) with its headquarters in Bambari.

M. Touadera and M. Onanga, it is now necessary to arrest Ali Darass and all the other warlords!